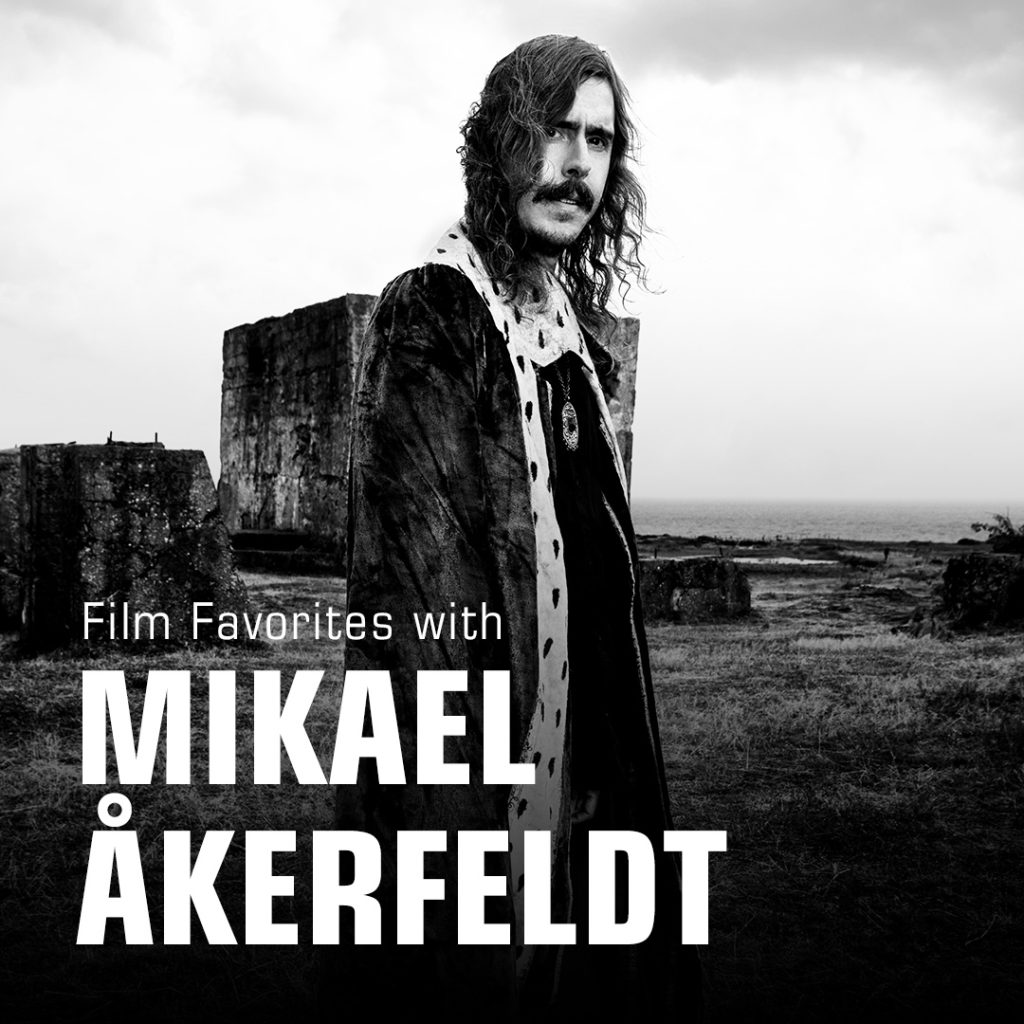 Mikael Åkerfeldt is famous as the front man for progressive metal band, ‘Opeth’, where he is the lead vocalist, guitarist and the band’s main songwriter. Åkerfeldt won a Swedish Grammy in 2003 for ‘Best Hardrock Album’ for Opeth’s “Damnation” album. He was also the guitarist in ‘Steel’ and vocalist/songwriter for death metal band, ‘Bloodbath’. He previously collaborated with Steven Wilson on Opeth’s “Blackwater Park” album and their side-project ‘Storm Corrosion’. He is heavily influenced by progressive rock and was ranked #42 in ‘Guitar World’s’ list of 100 Greatest Heavy Metal Guitarists of All Time.

Most recently, Mikael composed the score for Netflix’s new series Clark which is based on the life and career of Sweden’s most infamous bank robber, Clark Olofsson.

As an avid vinyl collector and someone who is often referred to as a “walking music encyclopedia,” we are delighted to welcome Mikael as this month’s guest for our Film Favorites series where he discusses his favorite film scores and what has influenced his own compositions.

The Clark soundtrack is now available to listen wherever you listen to music!

“I have always loved this film. Since I first saw it when I was a child. It’s so stunningly beautiful, sad, violent and terrifying at the same time. I can’t really remember the soundtrack but ‘Cavatina’ is in there, isn’t it? Nevertheless it is a ”must see” film for sure.”

”The film itself is a vintage pornographic film so I don’t have much to add there. But the music is absolutely stunning. The soundtrack is one of my absolute favorite records of all time. It’s composed by this fella called Alden Shuman. I’ve been looking for more music by him. Perhaps his name was an alias? The soundtrack doesn’t really fit the ”plot” of the film I guess. It needs to be enjoyed without the specific images for which is was written.”

”Again, I can’t really remember the soundtrack much, only that it heightened the melancholy of the film. Harvey Keitel and the late, great William Hurt stars here together with Forest Whitaker. All are absolutely stellar. The smoke-shop scene where Harvey’s character shows his book of photos to Hurt is just….beyond words. It is just achingly sad and beautiful.”

”I saw this when it came out and it blew me away. I’ve seen it numerous times since, and it’s fantastic every single time. I really wanted to look like Gary Oldman’s version of the old count but alas, I didn’t want to walk around Stockholm in a top hat and a suit. Oddly enough my daughters constantly tell me I look like Oldman’s Sirius Black from the Harry Potter series! I take it as a compliment. Lovely soundtrack by Wojciech Kilar too!”

”I can’t think of many better examples of a film where the music is so pivotal to the overall experience. Jerry Goldsmith wrote music that every death and black metal band could only dream of composing. It’s downright chilling. The film itself is a masterpiece. Slow. Brooding. Insanely scary. Gregory Peck is just awesome as the troubled ambassador. And Damien Thorne? Wow! Casting a child like that for a role as the antichrist himself? Perfect! Just perfect!”

”One of the most underrated films in Scorcese’s filmography. Or is it? I don’t know. It’s just the best fucking film ever! I absolutely adore Rupert Pupkin and what goes on in his head. I mean, it’s disturbing as hell, but I just feel for him. It’s hands down De Niro’s best performance, and that’s saying a lot! Also have to mention Jerry Lewis. What a stellar performance! I get chills thinking of it now. I can’t believe Joker (2019) didn’t get more flack for completely ripping this masterpiece off. With that said, Joker is still a great film (and amazing soundtrack) but still!”