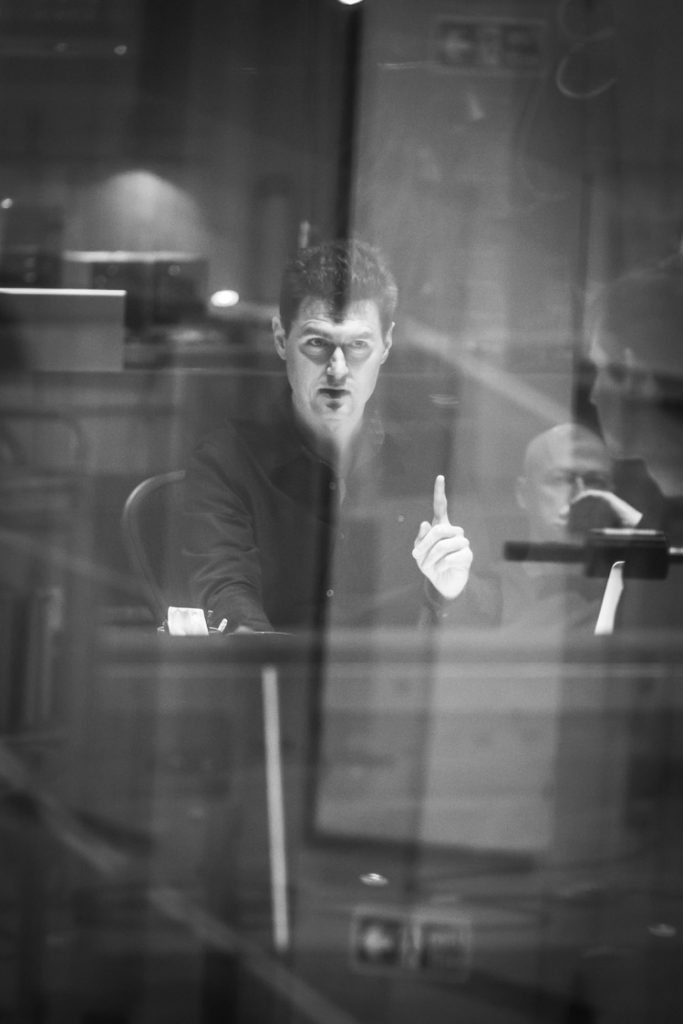 We had a chance to sit down with Adam Cork, the composer of Genius, and discuss his work on this classic score.

My work as a composer has been mainly in theatre; in the West End, on Broadway, and at wonderful venues like the Donmar, the Almeida, and the National Theatre. It’s been through my theatre work that most of my screen work has arisen, whether that’s scoring Shakespeare for the BBC Hollow Crown: Richard II or Patrick Stewart’s Macbeth or the 2015 feature adaptation of my musical London Road, co-authored with Alecky Blythe and originally produced at the National Theatre. Genius is the first feature I’ve worked on which isn’t adapted from a theatre work, so it presented an exhilarating challenge.

How were you contacted to score Genius?

Thanks to a long-time collaboration in theatre with Michael Grandage. He could have chosen to work with a composer far more experienced at working in film, but instead – together with fellow producers James Bierman and John Logan – he elected to offer me an amazing opportunity.

How did the collaboration with the Michael Grandage go? A few words on the creative process…

Working with Michael is always an immensely stimulating and trusting process. He has a specific clarity of vision which nevertheless allows room for freedom and experiment. He also gives brilliant notes. For example when I’m guilty of throwing too many ideas at a cue, he can banish the clot with a few well-placed words. ‘Keep it simple and strong’ I remember him saying at one stage in the Genius process – the words cut through a miasma of ideas I was trying to shoehorn into a moment which couldn’t bear them all. I then went away and a couple of hours later I’d written one of my favourite cues of the film – ‘Bedtime Story’.

I wanted to write music which served the story, which could breathe within both period and place without being slavish to either. In this case the music also needed to have its own discursive quality in the literary world of the story. I decided to represent the call and response of writer and editor with a simple four-note motif, which is answered by its inversion in a complementary completion, and by bonding solo instrumental colour to the two central characters. Tom’s instrument is the clarinet, super-articulate in its relationship with tradition but also the innovatory styles of the Jazz Age. Max’s is the violin, its New England reserve and plainness sitting on the surface of an inner reservoir of generosity and an underlying romantic warmth of spirit which Colin Firth captures so perfectly. And the beating heart of the relationship between author and editor is contained within the ‘Flow Gently Sweet Afton’ melody – a traditional Scottish theme which was Max Perkins’ favourite tune. These few ingredients are the backbone of every bar of the score.

The jazz club songs had their own requirements. I wanted them to catch the era – poised between two decades, looking back into the 1920s and forward into the 1930s, but also to contain something of the details of our story and its characters. So all of these songs are either variations on Max’s favourite tune ‘Flow Gently Sweet Afton’ or variations on an imaginary song with imaginary lyrics by Jude Law’s brilliantly manic, relentlessly verbose Thomas Wolfe.

It was a fantastic experience to record in studio 1 at Abbey Road with engineer Lewis Jones. During an intense two long days of recording we captured a symphony orchestra, a choir and a smaller jazz-inflected ensemble. I orchestrate everything myself but I don’t conduct – preferring to sit and listen with my scores and a pencil. There was a drama on the second day when my conductor Tom Deering called in with a suspected broken arm following a cycling accident! Luckily for me another colleague David Shrubsole was available to come in and work on the session.

That’s a hard question to answer as every production needs a different approach. I could aim for something which doesn’t pull focus from the story but gently supports it, or something which has its own distinct life next to the other production elements. I don’t think there should be too many rules – I always find my music finds its best form when it’s grown out of the specific soil of a unique script, a unique directorial vision and design, and the specific interpretative art of the actors.