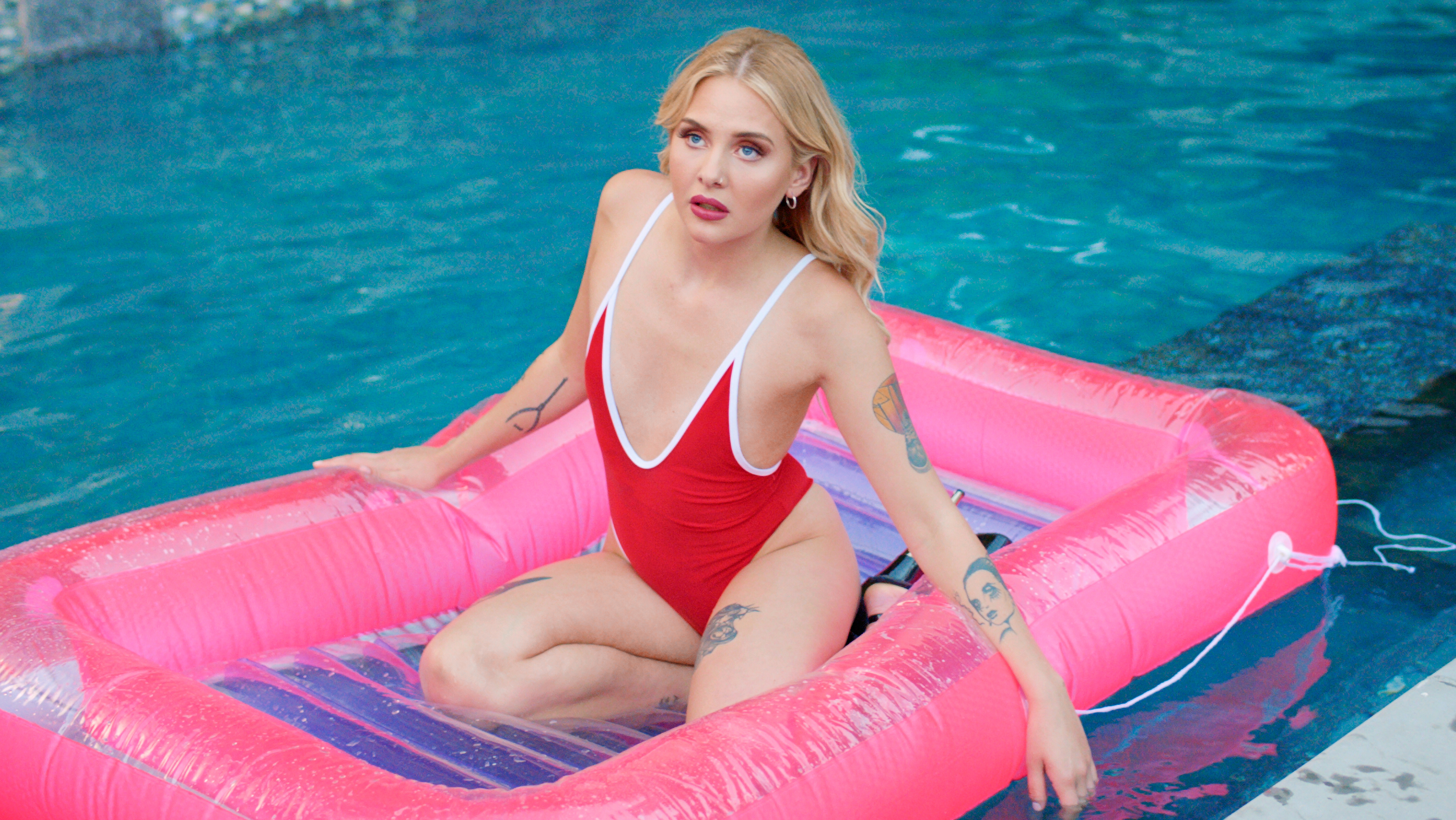 What does Pleasure sound like? For Director Ninja Thyberg the sound of her debut feature film Pleasure needed to be anything but conventional. Through close creative collaboration with a dynamic team of musicians led by Swedish composer, producer and arranger Karl Frid, a euphoric mix of sacred chorale music, hip-hop, and trap was born.

We sat down with composer Karl Frid to go deeper into origins of Pleasure’s soundscape:

How did you come to score Pleasure? Where did your composing process start?

I was approached pretty late in the process, about a month from final cut. The producers Eliza Jones, and Markus Waltå asked me and my brother (Pär Frid) for a meeting with Ninja and sent us a rough cut of the film, without any temp music. I remember I was just knocked out by the strength of the film and the fresh and raw look into this special parallel universe. It was so liberating with this obvious and genius take on the female gaze. I often compose film scores with my brother, we’ve been a team for many years, but at the time he was occupied composing on a commission for an orchestral piece, so we decided that I should write the score on my own.

What was it like working with Director Ninja Thyberg? Were there any reference points or influences you discussed at the start of the collaboration?

Ninja wanted an epic score and a unique and special sonic universe for the film. We wanted the music to be a statement in itself. Still, it was also very important that the score wasn’t generic or tried to push emotions or judgement on the characters. Music shouldn’t always go with the emotions but rather be a juxtaposition on what we see on the screen.

The film has so many layers, and I was constantly reminded and enlightened by Ninja about all the different meanings and details. The film is also changing between many different storytelling techniques – social realism, dark comedy, elevated scenes in slow motion, and also seductive almost like a music video. This made it challenging to score. But fun!

We talked about a lot of different references – The Harlot vs the Madonna, Heaven or Hell, the female body and the female orgasm, but the only clear musical reference was probably Medieval composer Hildegard von Bingen and her choral works for nun choirs.

How did your background in classical music inform your work on Pleasure?

I’ve always had a very wide musical taste, both what I listen to and what I create or perform. When it comes to creating music I’m constantly trying to widen my scope and find a way of looking further than the obvious, I guess. Yet, when writing music for film you have to be aware of the references that everyone has imprinted since childhood, and how playing with these references can manipulate the audience. I think in a sense I have the same way of creating music as listening to it. It’s equally important how it sounds and how it feels. Once I know the feeling I’m after, I know what components I need and how it should sound. It certainly helps to have a classical training and background when trying to create that kind of musical universe, but I think I approach the classical music the same way as I would do to jazz, pop or rock – with an open mind.

When I was recording with opera soprano Caroline Gentele, I wanted to use Latin lyrics rather than English, so as not to distract the viewer or load the scenes with unnecessary information. I used some classical Latin quotes that I found worked well within the film and that matched the choral sound I was after, such as “Fata Viam Invenient” (Fate will find a way). But for some of the works I wanted a deeper more sublime meaning, and together with Caroline we started to read through the old church mass lyrics that Mozart used for his Requiem. I got attached to “Confutatis”, that became symbolic for the journey of Bella – the further up the career ladder she climbed, the deeper morally she descended. There are religious connotations in the music but there are no real religious messages, we’re rather playing with our perception of the sacred and innocent.

How did you approach the idea to mix sacred choral opera with hip-hop? Did you encounter any challenges blending genres?

I think the balance came about itself, but also because the two genres don’t necessarily clash in register. Also hip-hop is mostly sample created music, and there really aren’t any rules attached to it rather than that it has to be a fat beat and nice sounding samples.

Still I noticed early in the process that it was harder to have Caroline singing in the classical theatrical style of opera. It tended to become too much, and felt almost ridiculing and ironic. However, it paired nicely with the elevated sense of Ava’s theme, where I also had Caroline singing an arpeggio in three parts. Mixed together, it felt like a good balance to get that elevated feeling to Bella’s perception of Ava.

Was there an early moment in your process or first cue that unlocked the rest of the film’s sonic palette?

After our first sit down I started doing some sketches based on some different ideas that we first talked about. At this point we had talked more about different instruments such as cello and abstract textures, but it all turned out too generic! So I went back to the drawing table, booked a session with Caroline and tried some different ideas with her. One of the sketches I made was “Confutatis,” where I had Caroline sing different layered vocal parts in a choral sacred tone over a basic trap beat . When I played it for Ninja and tried it with the first sex scene, we immediately knew that we’ve found something.

What was your process like collaborating with soprano Caroline Gentele, who performs the opera parts?

Caroline is fantastic. I worked with her on different projects before and she’s a good friend of me and my brother. What’s really special about her as a classical musician is her ability to improvise and play it by ear. I really used her as an instrument rather than a vocal artist to some extent. We had a very special and rewarding work process. Rather than providing her with sheet music I could just sing or play my ideas for her and we would try it out and record it and start layering from there. I would come up with the different parts as we went. She would also be able to improvise and play around with different techniques and emotions, and I could direct her into different emotional states, which really gave each musical track its own emotion and direction.

Was there a certain scene you enjoyed scoring most?

I think it must have been the scene when Bella calls her mom. For this scene I wrote the theme “Ignis Tartari”, where I tried to gather all the anger and sense of injustice I could muster. This starts with a whisper and gradually turns into a raging choir, almost like a piece out of Carmina Burana. It was also a very special moment in the studio, where I pushed Caroline in a direction, feeding her with images of all the injustices against women in the history of mankind. We ended up crying and hugging it out, so yes it was a very special scene and part of the score for me. Caroline also helped me track down a professor of Latin to get a correct translation of what I wanted her to sing.

Tell us about some of vocal samples used on the soundtrack, how did you incorporate them into the score and where did they come from? What was it like experimenting with the sound of the female orgasm as a musical instrument?

Ninja had this idea of using the female body as a sound palette. And we talked a lot about the female orgasm, on how it sounds, and how it’s expected to sound. Caroline did a lot of moaning improvisation, and I used these takes as samples that I played around with. For one scene Ninja wanted the sensation of a woman giving birth, and I used these samples with Caroline for this purpose. I also made different voice synths based on different recordings of Caroline, that I used both as bourdon notes as well as chords. For instance, “Una Gioia Sempre Viva”, the theme for Bella & Joy’s friendship, is almost entirely made with voice synths of Carolines recordings. I also made a vocal drums of Sofia Kappel’s sync takes from set and her ADR, using her fake moans to make different beats.

Then Ninja had this idea that was an homage to Swiss video artist Pippilotti Rist, that some of the lyrics should be screamed. I recorded Ninja one early morning when she was screaming her lungs out to “Confutatis” and “Voca Me Cum Benedictus” and it was amazing. When Ninja left just before lunch I met a neighbor looking at me as I was some kind of a monster. I can only imagine what she thought had been going on in the studio…I managed to blend in Ninja’s screams in the track and we ended up using that stem just barely audible in the aftermath of the strap on scene with Bella and Ava.

What was your process working with Mapei? How did you work together to create the original songs featured throughout the film – “Una Gioia”, “Hard to the Core”, and “Good Girl / Bad Girl”?

Mapei is great. She is a sheer musical force. When Ninja and I talked about the idea of adding rap vocals to some of the tracks, there really was no other option for me. I simply couldn’t come to think about any other female rapper. I was so excited when Ninja asked Mapei if she was interested and she said yes. Mapei saw a cut of the film, and she and Ninja talked about different lyric ideas. Then she turned up in the studio, eight months pregnant, and she just killed it. Blew me away. It turned out even better than I could’ve imagined  it to be, and it was so much fun recording her. First we only had this idea of her adding rap to “Una Gioia” that was meant for the Uber scene, when the girls are on the way to the pajama party, but then I asked her if she could do to more, “Hard to the Core” and “Good Girl/Bad Girl”, and they turned out great as well. Mapei is one of these really cool artists that can go into character and change her entire output depending on the song.

What was it like to write music for such bold and provocative material? How did you deal with some of the more explicit  scenes?

Well, I don’t think the biggest challenge was the explicit material displayed. It felt natural. I think Ninja said in an interview once that ”Bella is working with dicks, and you can’t tell that story without showing some dicks.” But of course some of it is disturbing, but rather in the sense that you really get the working conditions and the patriarchal structures that lays behind. This also works as a mirror for men, and for me it was an eye opener.

Pleasure is now available to watch on digital via Neon.